How to: Bell Peppers

posted in Food, Vegetables and Beans by Jessica Howard 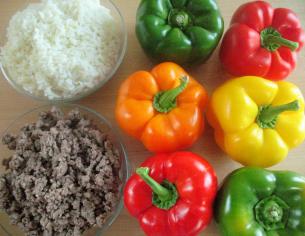 With their bright yellow, red, orange and green skins, bell peppers are the sirens of summer produce. We love these capsicums because they bring color, sweetness and texture to our dishes – either raw or cooked. And they’re no slouch in the nutrition department: one cup of chopped, raw red pepper contains more Vitamin C than one cup of orange juice. Peppers are often available year round, but it’s great to get them now, while their flavour is peaking and their prices are dipping.

How to Pick a Pepper

Red, yellow and orange peppers are sweeter than the green ones, because the green ones are not ripe. When buying bell peppers, look for clear, shiny, intact skins. They should feel firm and heavy for their size. They can be stored in the fridge for about a week.

How to Cut up a Pepper

When it comes to preparing bell peppers, first wash and dry them. Then, remove the stem by cutting around it in a circle. This gets rid of most of the seeds. When you look inside, you’ll see the white “ribs”; slice down the ribs, so that you have three or four pieces of pepper. Check out Vegan Yum Yum’s photo tutorial for great instructions on cutting peppers.

What Can I do With Peppers?

Eat them raw: Enjoy crunchy strips of raw bell peppers in your next vegetable platter, or throw some diced pepper into a chef salad. A whole bell pepper with its stem and seeds removed can serve as the “bowl” for a dip, pasta or rice salad.

Eat them roasted: Cooking peppers really brings out their sweetness, so roasting them under high heat is one of the most popular cooking methods. Here’s how: Preheat the oven to 500 degrees F, and line a baking pan with foil. Cut the pepper into quarters, place on the foil and roast until the skin turns black. Once out of the oven, cover the pieces with a tea towel or put them in a container with a lid. When the pepper has cooled, you can peel the skin off. The soft pieces of roasted pepper can be added to salads or sandwiches, or can be incorporated into other recipes. Try some roasted read pepper with cream or goat cheese on bread. If you’re in a pinch, you can buy roasted red peppers in a jar – but they’ll taste better if you roast them yourself.

Eat them any way you can think of: Peppers are also great in stir-fries, soups and stews.

This Asian Noodle Salad makes a delicious, light summer dinner. Aside from cooking the noodles, the preparation mostly consists of chopping – red and yellow bell peppers are cut into thin strips. The recipe suggests mixing the dressing ingredients and letting it sit for at least an hour – if you haven’t got time for this, simply use a bottled Asian dressing.

If you’ve gone crazy and roasted a bushel of peppers, you can throw them in the blender with a bunch of other ingredients and whip up this Red Pepper, Feta and White Bean Dip.

Penne with Sausage and Peppers: “This sort of dish is perfect on a Monday when I’m tired and dopey from a migraine pill, and just want my food NOW PLEASE AND THANK YOU,” says Alison at This Dessert Life. This meal comes together in about 35 minutes, resulting in full tummies and yummy leftovers.

If you prefer potatoes to pasta, try Kathy’s Roasted Vegetables and Sausage, where your whole dinner gets cooked in one go. You just cut up some peppers and other vegetables and roast them in the oven with chunks of sausage.

Peppers are part of a Tex-Mex mix in Turkey and Pepper Enchiladas. You sauté onions and peppers, brown the ground beef, mix in a little sauce and cheese, then bake for around half an hour.

A classic Italian summer side dish is Peperonata. The recipe calls for six peppers of different colours, garlic, two onions and a cup of chopped tomatoes (either fresh or canned). This all gets cooked up in a flash, then enjoyed hot out of the pot or cold the next day.

On a day when you’ve got lots of time to chop, try making Ratatouille. This classic vegetable dish calls for eggplant, zucchini, mushrooms and peppers, which all get cooked together. The finished mix tastes great either hot or cold. As Cooking With Engineers suggests, it tastes great on baguette.

I’ve been having a love affair with bell peppers lately… A couple weeks ago I bought a few red, orange, and yellow ones (sweeter than the greens) for a veggie tray.

And since then, I’ve been really sad if there aren’t several in the fridge, washed and cut, ready for snacking. They’re so refreshing, juicy and crunchy at the same time, and delicious, they don’t even need anything on them! Raw and naked is good. haha.

Thank you for all of the great recipes lately for seasonal summer produce. These are wonderful!

I absolutely adore roasted peppers. And I love that peppers are a great source of Vitamin C when I’m not up for acidic foods like citrus fruits.

My favorites are the red peppers. I can’t figure out why they are always more expensive than the green ones???

I just made a black bean salsa with fresh pineapple, ginger, garlic, green onion, and chopped red pepper. It was delicious and the red pepper really brightened the flavor and the look of the salsa. (That with some tender lettuce leaves and leftover chicken and my lunch was complete!)

My mouth is watering just thinking about your salsa, Kathy.

I was very pleased to find this site.I wanted to thank you for this great read!! I definitely enjoying every little bit of it and I have you bookmarked to check out new stuff you post.

Thanks Everyone! I really appreciate the applause!