posted in Food, Vegetables and Beans by Kathy Maister 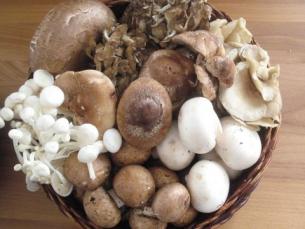 When it comes to buying mushrooms, we often go by appearance rather than taste. We stick to those clean-cut white button mushrooms, perhaps a bit intimidated by the wilder characters in the fungus family. But it’s worth getting to know all those odd-looking mushrooms—they can really add taste and sophistication to your cooking.

Most supermarkets sell a few varieties of fresh mushrooms, including portobello, oyster and shiitake, as well as bags of dried mushrooms. But beginner cooks may not be sure how to clean specialty mushrooms, or what to do with them. This post will take the mystery out of buying mushrooms and help figure out what kind to use when.

I have already covered the basics on how to wash and store mushrooms, but the basic idea is to rinse them (never soak them) and use a cloth or paper towel to remove any clingy dirt. 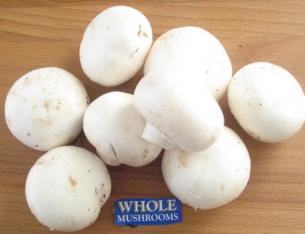 These immature, unopened mushrooms are probably the most common in North American supermarkets. They can be bought either fresh or canned. (I do not recommend using canned mushrooms.) Some grocery stores sell them pre-sliced but, once sliced, these mushrooms spoil quickly; they oxidize after being cut, turning brown and soft once exposed to air. They can be eaten raw or cooked in almost any dish, but their flavor intensifies with cooking. Bigger button mushrooms can be left whole and stuffed, for an appetizer or side dish. Check out startcooking.com’s recipe video for bacon-and-cream cheese Stuffed Mushrooms. 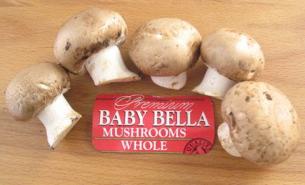 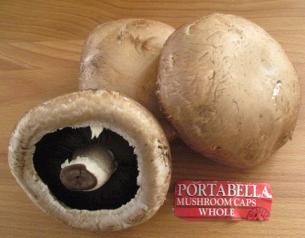 These are the grownup versions of the baby bella mushrooms, and can have caps that are six inches in diameter. They may be sliced and sautéed, but are often left whole and roasted. They have a rich taste and meaty texture that’s often likened to steak; some vegetarian recipes use them as a meat substitute. Their tough stems should be removed before cooking. Although the dark brown gills under the mushroom cap are edible, some prefer to remove them. To do this, simply scrape them off with the tip of a knife. Here’s startcooking.com’s recipe for Portobello Mushrooms and Goat Cheese. 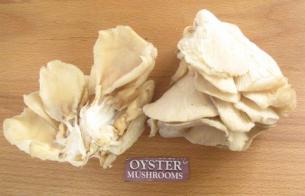 These fan-shaped mushrooms grow on the sides of trees, looking kind of like an (you guessed it) oyster. They have a mild taste, and work well in stir-fries, soups, sauces and many other dishes. Cut off the base of the mushroom, then separate its layers before cleaning them. 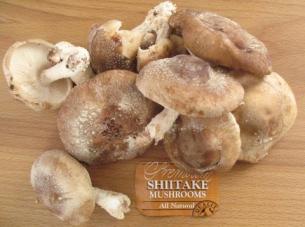 If you like Asian food, you’ve probably tasted these in miso soup, sushi or in Chinese stir-fries. They have white stems, brown caps and typically sprout off logs. Shiitakes add a deep, smoky flavour and chewy texture to all kinds of dishes. They are available fresh or dried, which is said to have a more intense flavour. In Asia, shiitake mushrooms are associated with longevity and good health. 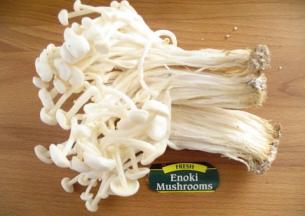 These long, crisp mushrooms are usually used in soups, but can also go in salads and sandwiches. They can be eaten raw or cooked, and are available fresh and canned. They grow naturally on the hackberry tree (enoki in Japanese). Cut off the roots before using. 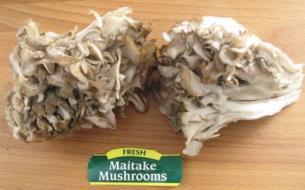 Clustering around the base of trees, these feathery fungi are known as the King of Mushrooms in Japan because they can grow very large. Used in China and Japan for medicinal purposes, they have a strong, woodsy flavour and meaty texture. They work well in stir-fries. 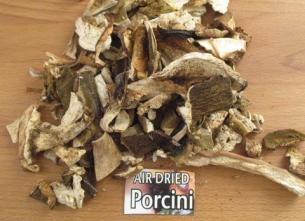 Porcini Mushrooms (these are the dried version)

Prized in Italian cooking, these large-capped mushrooms typically grow in Europe and North America. They can be bought fresh and, because of their meaty texture, can be grilled and sautéed much like portobellos. They are often available dried in bags, and after being soaked in water, can be added to soups, sauces, stews and risottos. Read on for more about reconstituting dried mushrooms. 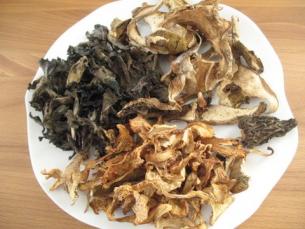 It’s nice to have a bag of mixed dried mushrooms (like the ones above) on hand to add “oomf” to all kinds of dishes. Just remember to leave time to reconstitute them. There are various ways to do this, depending on how much time you have. The dried mushrooms can sit in a bowl of cool water overnight, or in warm water for 20 minutes before cooking. They can also be boiled for 10 minutes before cooking. The water that they steep in will have lots of flavor and, if strained through a coffee filter to remove grit, can be used in place of other liquids in recipes.

After I finished photographing all these mushrooms, I sliced them and cooked them in a large frying pan with a small amount of olive oil. They were FANTASTIC!

This is a great article. Mushrooms can be so confusing, but really can make a dish something special. Thanks for sharing.

Thanks FtC! The best part about photographing all these mushrooms was then cooking and eating them!

I cleaned them all, sliced them up and fried them in a bit of olive oil. A sprinkle of thyme and some salt and pepper and they were fantastic!

Dried mushrooms, on the other hand, often end up having a rubbery texture, no matter how long I soak them!

Does anyone have any secrets to share on cooking dried mushrooms???

Hi there your show are great. love it. I have question for you do you have something for christmas Holiday cooking in video.

How can i keep the cut mushrooms from turning dark in a salad?