posted in Vegetables and Beans by Jessica Howard 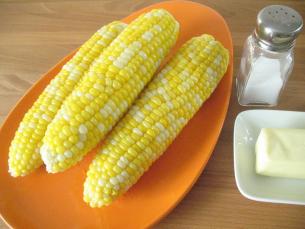 Fresh, golden, crunchy corn is here! It’s piled up at markets and at roadside stands. When it’s so plentiful, the temptation is to buy six ears at a time. But then what do you do with it all?

Kathy has already posted a tutorial explaining how to buy, shuck and cook corn on the cob. This is also a great starting point for using corn in all kinds of “off-the-cob” dishes. Once it’s cooked, you can use those fresh kernels on salads, in omelets, stir-fries and soups.

Some of the recipes below call for uncooked fresh corn – just cut off the kernels and you’re ready to start cooking!

Corn is coming to full swing for us in Vermont, we’ll have to try some of these recipes out.

I LOVE fresh corn on the cob! It is such a treat!

Thanks for the link. We love salsa. I think I’d like to try out the corn and tomato salad and the corn chowder. Those look delish.