Measuring Foods around the World 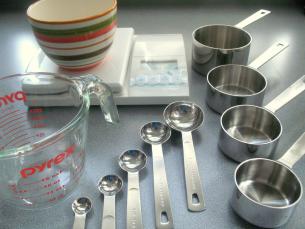 I have just finished a video on How to Measure Food, the American way! Unfortunately there is no single standard way of measuring cooking ingredients that is used around the world.

Even though the three most common systems are Metric, US Standard and Imperial, it’s almost impossible to cover all the differences, since there are an almost infinite number of variations. I’m going to focus in this blogpost on comparing Metric and US Standard.

We’ll look at the Imperial system another time. (British cooks, or Americans trying to use British recipes, can become very confused because the British and American systems used many common measurement names, yet the measurements aren’t always the same!)

There are excellent conversion charts on-line which can help you translate recipes!

It’s important to remember that, in any system, there are measures of both solids (so-called “dry measures”) and liquids.

In the US, volume measurements are usually given for most ingredients, weights are sometimes used for others, and (just to make it even more awkward) amounts are sometimes expressed in both terms. For example, you’ll sometimes see a reference to “one pint (8 ounces) of milk” or “four tablespoons (two ounces) of butter.”

Beware! The liquid “ounces” in the first example (milk) and the solid “ounces” in the second example (butter) have the same name, but reflect two different measurement systems. A liquid ounce is a measurement of volume, and an ounce of butter refers to an ounce by weight. Yes, recipes should always say “liquid ounce” when they refer to a liquid, but it usually gets left out. You have to interpret it using common sense — is the item usually liquid (volume) or solid (weight)?

The most important difference between the US and European (Metric) systems, apart from the terms used, is that the US tends to rely predominantly on volume to measure ingredients, (i.e. when measuring flour Americans tend to use the “dip and sweep” method shown in my video while in Europe they usually measure dry ingredients by weight and only liquid ingredients by volume.

If you are using a recipe from one system (US, Metric or Imperial) that is not the one you normally use, I’d strongly recommend converting all of the ingredients into your familiar system before beginning to cook. Otherwise, you could end up with really confused proportions!

I know this all sounds really complicated!! Hopefully some of the other posts that I have written on measuring will help to clarify the topic:

As a European, I always get somewhat confused when trying to cook American recipes (specially when they involve butter sticks… a strange measurement if there was one). Having said that, this is nothing compared to the Imperial system which kinda makes you understand how all these cliches about bad English cooking came about. Measuring by volume is a lot easier when it comes to small quantities (1 tbsp, 1 tsp), while I feel that weighing your ingredients is a lot better when dealing accurately with more than that…

Mar, I totally agree! I use my kitchen scale all the time to measure but unfortunately it is not the norm here in the USA.

I do wish we would adopt the metric system in the US or, failing that, at least switch to weighing ingredients, especially for baking.

Whenever someone asks me what went wrong with their cake or bread, my first question is: How did you the measure the flour? Dip and scoop? Lightly spoon into the cup? Scoop and bang against the counter to level it? That’s so often the culprit.

Ella, I totally agree! I always use my scale when baking. It is so much more precise than the dip and sweep method. If someone big, like the Food Network TV, gradually introduced metrics in cooking and measuring by weight, I am sure it could change a nation’ cooking style! Do you think they might be listening?

This site is great!