Fruit Cake: Love It or Hate It?

posted in Sweets by Jessica Howard 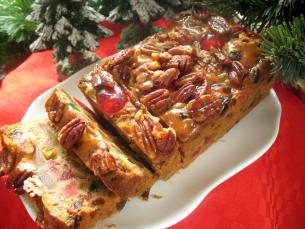 As a born-again fruitcake lover, my opinion is that the haters simply haven’t tried good fruitcake. So many different kinds exist that there’s bound to be a style suited to any taste. Many do contain alcohol, but there are some varieties that do not. And there’s even a fruitcake option that doesn’t involve any baking!

Whether you want to buy it or try making it, you really should give fruitcake a try. Here are 10 tips on what to look for in fruitcake:

Whether you were in love with fruitcake before, or wouldn’t touch the stuff, now’s the time to give it a try! You could make it or buy it, stick with a classical variety or go with one of the alternatives, but ultimately, no holiday is complete without it!

Thanks for the shout out. This post is a great primer on fruitcakes–I wish I had had it when I got started trying them all!

A good fruit cake is also often good with some butter spread thinly on the slice!

I LOVE fruit cake, but Jon, skip the butter and pass me some egg nog!

Paula from Only Cookware said:

For me, fruit cake is only good if it is moist. If it’s the least bit dry I don’t like it. And yes, definitely a bit of egg nog on the side.

I am looking for a fruitcake from my youth that is the taste of christmas for me. I associate the taste of the fruitcake with the magic of christmas though I have only tasted once and that was when I was in the 5 to 8 year old range growing up in southeastern Michigan. Its is my reference for all fruitcakes and I have not found one to come close even though I try every christmas time to find one. Have kissed a lot of frogs.

I recall the cake being dark in color with red and green citron/candied fruits. The taste reminds me of the elfs of christmas and must be a combination of such spices as clove and ginger. Sort of a sweet twang rather than the mellow taste of nutmeg and cinnimon. Perhaps mace? I have seen a recipe with ‘mixed spice’ what ever that is.

Probably have to taste it to find it. Please help in my christmas quest.

i am in about 22 days of making a brandied fruit starter. my receipe didn’t call for brandy. it called for yeast in the starter mix. will it still turn out? or should i start over. i have an old receipe from a great,great aunt who died a few years past.

Hi Gary, I have checked with several people and have come up empty! No one I spoke to has done their own starter mix. Sorry I couldn’t help.