posted in Vegetables and Beans by Kathy Maister

You may have seen leeks at the grocery store and wondered what sort of vegetable they were. 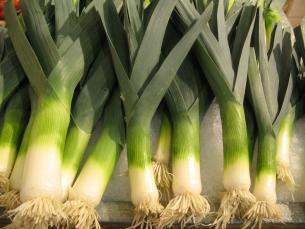 Well, leeks are part of the onion family and, in fact, look like a giant version of green onions. However, the little green onion has a much stronger onion flavor then the leek. Another difference is that you need to cook leeks before eating them. Unlike an onion, you would not add an uncooked leek to a salad! 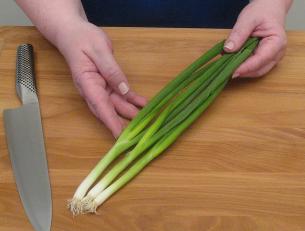 Leeks are a very mellow version of an onion and when cut they have a beautiful variation in color. They go from white down by the root, to a yellow center, to a really dark green at the top. 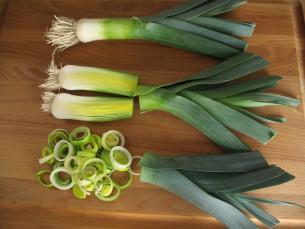 Cut the leek just below the really dark green part. Those really dark, green leaves are very tough and you don’t eat them. Like an onion, the leek has a lot of layers on the inside, except that the leek has a lot more finer layers. Each of these layers has an amazing amount of sandy grit between them. Leeks have to get washed really well to get rid of all that grit.

If you are going to cut the leaks into rings or small strips, do that first, and then put them in a bowl of cool water. 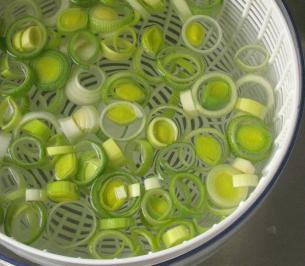 I’m using my salad spinner. The leeks will float to the top and the grit will sink to the bottom of the bowl. You will need to swish everything around a bit to make sure all the layers of leek are separated.

You can then run them through your salad spinner or just lay them out on a towel to dry off.

If you are going to cook the leek whole, you still have to cut it in half to wash it. (Or you could just make a cut half way through and spread open the leaves.) Fan out the layers with your fingers and let the water run through. 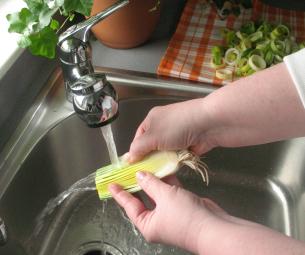 In my next post I will be making soup using these lovely leeks instead of onions! 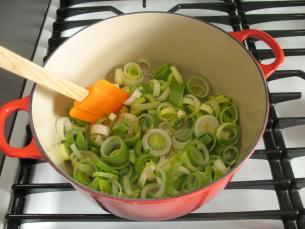 (By the way, the leek is the national symbol of Wales!) 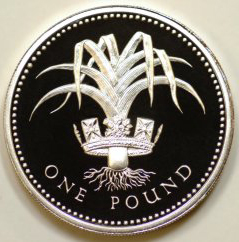 Does anyone know the health value of this plant? I was told that it is a natural diuretic.

If you read “French Women Don’t Get Fat” by Mireille Guiliano, she states that Leek’s are a mild diuretic and low in calories, but highly nutritional. Forty-eight hours of Leek soup plus all the water you want will provide immediate results in rebalancing one’s eating habits and a road to wellness.

You may find leek recipes at this website: http://food.yahoo.com/search?tp=recipe&p=leek

Frank, you can also substitute onions for leeks. They have a milder flavor but they still make a perfection substitution.

You mention that you wouldn’t eat a leek raw, but I think they taste great in a lettuce-type salad! Why not eat them raw?

Good point! I just never have eaten them raw! I will have to give it a try.

If you have extra fresh leeks around that you don’t plan on cooking up before they go bad, can you freeze them?

Hi Megan,
I always freeze extra chopped onions, in about 1/3 cup portions, and then use them in cooking soups or stews. I toss them in the pot, frozen, and they defrost and cook up in no time.

Leeks are much the same. Cut and wash the leeks and dry them completely. Freeze them in small portions.

Like onions, leeks do get a bit mushy when frozen so it is best to use them in cooking when defrosted.

Thank you for information about handling and cooking leeks. I’ve never used them before, but am preparing a very special Irish Stew (in a crock pot) for the Superbowl Game.

Good luck with your stew! Just remember that leeks are very sandy and need to be washed thoroughly.

Have you tried my Guinness-Stout-Beef-Stew? It’s perfect for this time of the year.

I am a very creative cook and never use a recipe. All of my creations are just made up as I go along and all are vegan. Every time that I see leeks at the store I wonder how to use them. Today I decided to take the plunge and your web site gave me just the information that I need to proceed. I am doing “Lentil & Leek Soup”. It will be fantastic! Thanks for your help!

Nancy, delighted to be of help! I applaud your creativity.
Cheers,
Kathy

I really do not have a recipe and make it up as I go along, though this is what I remember……

I always save the water from my steamed vegetable pot the night before and the next day I recycle all of that nutricious juice into the slow cooker.

I cleaned 1 cup of lentils and added about 3cups of vegetable water to the slow cooker. Then I tossed in about 2 leeks chopped and cleaned. I had left over cooked cabbage and carrots which I added along with some beet juice, chopped celery (along with the leafy tops), garlic, parsley, kale and a whole chopped tomato. I seasoned it with a small amount of salt and Mrs. Dash’s Lemon Pepper. It was delicious! We ate it over brown rice. Enjoy!