How to make S’mores, Indoors or Outdoors

posted in Sweets by Jessica Howard 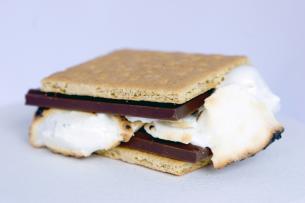 This is the time of year for camping, which is all about enjoying the great outdoors … and S’mores! We have the Girls Scouts to thank for this classic campfire dessert – the first written recipe for S’mores is apparently in a 1927 Scout handbook.

For the uninitiated, these treats traditionally consist of a gooey toasted marshmallow and a piece of chocolate, pressed between two pieces of graham cracker. There are all kinds of variations on this combination; you can make it as gourmet or decadent as you want. There are also some S’more-inspired desserts, which use the same elements (graham cracker, marshmallow and chocolate) in different ways.

Fortunately, you don’t have to plan a camping trip or get the fireplace going to enjoy S’mores. If you’ve got the basic ingredients, and a microwave or toaster oven for toasting the marshmallows, you’re all set. This video provides a nice overview for those who have never made or eaten S’mores. 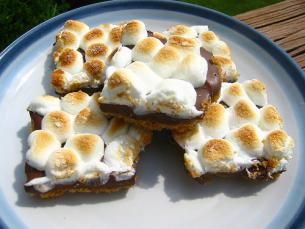 These S’mores Bars make a fun dessert for a summer party.
Photo courtesy of Alysha Russo at The Savory Notebook.

On our last camping trip, i introduced the group to s’mores made with something other than the standard hershey bar — we used reese’s cups and kit-kat sticks in our s’mores for an interesting twist on the classic taste

I don’t actually do outdoors

but I would consider it for a Reese’s cup s’more!

I appreciated what you have done here. Thanks