posted in Around the Kitchen, Kitchen Basics by Jessica Howard

If you’ve ever enjoyed a hearty, tender beef stew or the melt-in-your mouth texture of lamb shanks, you’ve enjoyed the product of a process called braising. This method of sloooooowwwwly cooking meat, vegetables or other ingredients over a low temperature turns out delicious results with relatively little effort. So, it’s a great technique for beginners to try.

It does take a little bit of planning ahead, though. If you want to try braising, keep in mind that you’ll have to get that pot on the stove (or in the oven) early in the day. Perhaps you can get the ingredients prepared in the morning and then cook them in the early afternoon so that the dish is ready for dinner. (Word of warning: do not leave your house with food cooking on the stove top or in the oven!)

Why Beginners Should Try Braising:

What to Braise in:

The recipe you’re using will dictate what kind of pot or cooking vessel to use, but here’s a rundown of some of the terms you may come across. 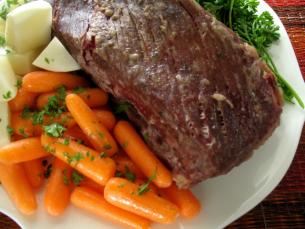 Start by trying Corned Beef Brisket—it doesn’t get easier than this!

Startcooking.com offers some recipes that serve as a great introduction to braising. Corned Beef Brisket (shown above) is a good starting point because, although the process involved isn’t technically braising, it demonstrates the benefits of slow cooking. The meat is not browned—all you do is put it in a pot, cover it with water, bring it to a boil, then simmer for 3 to 5 hours. You’ll end up with moist meat that tastes great as a main course or a sandwich filling. 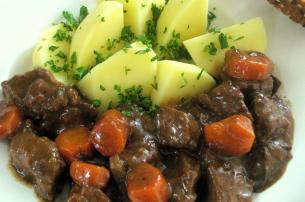 Guinness Stout Beef Stew is braised for a relatively short period of time, about 90 minutes.

The photo tutorial on Guinness Stout Beef Stew (shown above), illustrates every step of the braising process. This stew is also relatively fast, since it cooks for about 11/2 hours.

If you’ve got more time, and prefer a Guinness-less stew, watch Kathy’s video on Beef Stew, which takes around three hours to make.

Here’s a helpful guide to a cool-weather favourite: Pot Roast. This photo tutorial over at Greg Cooks shows how you transform a slab of roast into a delicious meal. It gets its flavor from wine, garlic and fresh herbs.

Farmgirl Fare offers a tutorial on slow-cooking lamb; it cooks for two to three hours, but the pictures indicate that it’s well worth the wait.

You may be familiar with the French classic Coq au Vin, which is chicken braised in red wine. In this recipe, the chicken doesn’t cook for that long (around half an hour), but you make a sauce at the end.

For those who own a Crock Pot, here’s a Stewed Chicken Curry recipe, explained in a step-by-step photo tutuorial. 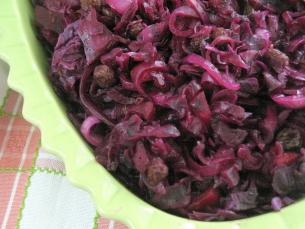 Kathy’s Sweet and Sour Cabbage combines cabbage, apples and raisins for a delicious side dish.

Braising doesn’t have to involve meat. Kathy’s Sweet and Sour Cabbage (shown above) demonstrates how slow cooking can be used to make vegetable-based side dishes.

My Vegetable Blog offers Sherry-braised Onions and Apples with Raisins, a dead-easy way to make a dish of soft onions that works well with cheese and baguette.

Braising is an excellent process, and it’s so easy. I especially like to use it for country-style pork ribs. You can bake, barbecue, slow-cook, or pressure cook those things, but nothing works as well as braising.

Thanks for stopping by my blog! These other recipes look delicious and I’ll definitely have to try them, especially that corned beef brisket!

You have a beautiful web site with fabulous photo-tutorial! I know how much work is involved in filming tutorials and “Hats off to you” for doing such great work!

thank you for linking to my site! I’m having a lot of fun with this project.
xoxo
steph

You are welcome Crockpot Lady! I do not actually own a crock pot, maybe someday!

(But I do believe KGW may well have convinced me that it is time to invest in a pressure cooker!)

Excellent overview. I don’t have much experience with braising (just one try on some butternut squash), but I should give it a shot again.

Excellent description of the braising technique! I will try it a.s.a.p. I’ve used a crock pot for a long time but I have never browned, added liquid and then baken the dish. Very French! Thank you.

You’re lucky to have a crock pot! Happy braising.

if you are making a pot roast with a rump roast on top of the stove, after braising, how long do you simmer it? for example, approximately a 6 lb. piece of meat

According to Wise Geek:
“You would first brown the rump roast on all sides, then allow it to cook, tightly covered, in a pan with vegetables and stock. The stock can be made from beef broth or bouillon cubes and water. Some recipes also suggest adding red wine. Allow the roast to simmer over low heat in the juices for 2 1/2 to 3 1/2 hours or until it is done. The meat should be very tender.”