posted in Meat, Poultry and Seafood by Kathy Maister

A pound (or ½ kilo) of ground beef is a great item to have on hand. There are tons of things you can make with ground beef; hamburgers, meatloaf, chili, English muffin pizzas, meatballs, lasagna, sloppy Joe’s. Enough said? 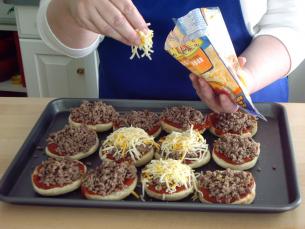 I have already talked about buying and storing ground beef. Today I am going to show you how to brown ground beef.

Technically, raw meat should be cooked to 160 degrees to kill off the bacteria. If you don’t have a thermometer, then just be sure there is no pink on the ground beef.

Preheat your fry pan for just a minute or two, on medium setting.

If you put the meat in a cold pan it will most likely stick to the bottom of the pan.

After the pan is heated add the beef to the pan. 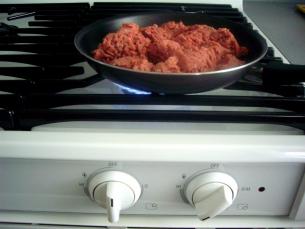 Now, using a wooden spoon or Silicone spatula, mash and stir and twist and turn the meat so that it gets broken up as it cooks. 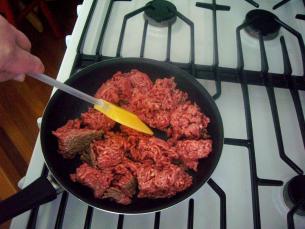 Keep stirring and mashing until all the pink has disappeared and all the meat has turned brown in color. 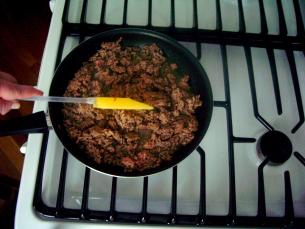 This should take about 5 to 7 minutes. After the meat has cooked, I like to strain it in a colander in order to drain off the fat, so that my creations don’t taste greasy or fatty. 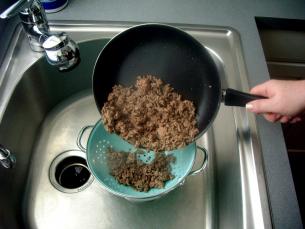 That’s all there is to browning ground beef.

What are some of your favorite things to make with browned ground beef?

Keep up the good work of explaining!

I just stumbled across this and while the colander idea sounds good, you’re not supposed to put fat down the drain! When it cools it can cause nasty clogs.

Thanks, Susan, for your comment. Perhaps I have been very lucky, but for many (many) years I have been doing it this way and have never had a problem. Is there an angel sitting on my shoulder?

Can you tell me how to brown ground beef so that it ends up in tiny pieces? I like a spaghetti sauce with tiny pieces of ground beef, not big hunks.

I agree with you Michael, I too like it broken up very finely and just mashing it with a fork as it cooks doesnâ€™t always do the trick.

I sometimes put the meat in my food processor and pulse it 3 or 4 times, then carry on with the recipe.

If you donâ€™t have a food processor, spread the cooked, drained beef onto a cutting board and with a kitchen knife; chop the meat to the texture that is right for you.

Straining in a collander is all well and good, but whatever you do, NEVER rinse it!

When I first went to college, I let one of my roommates (apartment, not a dorm) cook dinner one night. He browned the beef, transferred it to a sieve, and proceeded to hold it under the tap, thoroughly water-logging it and stripping it of flavor and juices. It made the absolute worst spaghetti sauce I’ve ever eaten.

G, you are so right! My college room mate did that to get rid of more fat calories and it tasted awful! Many thanks for adding that great tip!

Does adding water while browning hamburger help it cook faster? I don’t think it does but my boyfriend says it does.

Hi Mary, I never heard of that tip. Do you then drain off the excess water?

How long will ground beef stay good in the refridgerator AFTER it has been cooked?

Hi Jessica, no more than 3-4 days maximum. BUT…when in doubt…throw it out!

I know how to brown ground beef. However, when I continued to cook with the beef which has already “browned” it sometimes turns a pink color again after it’s been browned, am I doing something wrong? Again, it has already browned but then turned slightly pink during the cooking process.

Hmmm, very interesting Lorena, but I’m not sure what’s going on either! Any food scientists out there who would like to take a crack at answering this one?

I have a cast iron skillet and it browns ground beef easily. Now I have a glass top stove and have been told I cannot use the cast iron skilet on it as it can scratch or break the glass.

Does anyone have a recommendation on what frying pan I can use to brown the ground beef efficiently? I’ve tried a stainless steel pan and a non-stick one too and it cooks the meat but doesn’t brown it as good as the iron one does.

Glass top stoves look pretty but they sure do cause a lot of problems! From everything I have read, they require a lot of TLC.

You can buy “heat diffusers” at your kitchen store that will help heating evenly and maybe also protect for stove top from your cast iron pan. But I’m afraid a new fry pan may be the only solution.

My recommendation is to go to the best kitchen shop in your area and ask to see the pots and pans they have for use on a glass top stove – in three price ranges. They should be able to offer a solution in hopefully a good price range.

Do you have any recommendations yourself on what pan is the best?

How long can COOKED ground beef stay out. My husband grilled hamburgers and after we ate he place them in the oven to keep the flies away, and forgot to store them in the refrigerator that night. Should we throw them ALL away?

Hi Peggy,
I live by the kitchen rule – when in doubt, throw it out!
Cooked meat, left overnight at room temperature in the oven should definitely get the heave ho!

Just wanted to say thanks for an awesome website! I suck at cooking and this’ll help make things better! You are making my future wife (wherever she may be) very happy!

Jack that’s great to hear! I wish you the best of luck with developing your cooking skills and finding a mate!

This note is for Cary – with the glass top stove. I have a glass top stove (I hate it, but we won’t go into that now.) However, I use my cast iron pans on it with no problem. I do make a point of not sliding it around on the surface, but that’s all the special care I take. Any minor mars can be “erased” with most of the cooktop cleaners and a bit of rubbing. I won’t be held hostage by a stupid appliance. Good luck!

Karen, thanks for your comment. I love my glass-top stove because it’s easier to keep clean. The only thing I don’t like about it is that it’s easy to scratch with the iron pans.

Browning beef with an iron pan still seems to be the best way but I don’t want to use that type of pan on my stove. It’s still new and I want to keep it looking that way.

Glass top stoves do look great but they are indeed a lot of work. As you can see by my videos, I have a gas stove, which I love!
Question: if you do scratch your glass top stove is there anything you can do to buff out the scratch or is it there for good?

Hey Thanks for the great website, i needed help making hamburger helper, im trying to learn how to cook and this site is great

These links should help!

Hamburger – How to Make a Hamburger

Wow, um . . . that pretty much answered any and all questions I could have had. Half a minute and you’ve explained it thoroughly. You rule.

To rid some of the excess grease you can paper towel it.

So true! I have even hear that some people rinse the browned beef in hot water to remove even more of the fat!

How long can you store it in the fridge after it’s been cooked?

can i use corned beef instead? and how do i use it (corned beef) on lasagna ?

Leighanne, if you are not going to be using your (cooked) browned ground beef with in two days, I would wrap it up and put it in the freezer.

how about minced beef? is it ok for this preparation. if so, how do i use in lasagna?

will show you how to make a perfect Lasagna!

I was browning three packages of hamburger, with bacon and onion last night. One browned perfectly, the other two cooked, cooked and cooked but would not turn a brown color. The ground beef remained a dry, pink color. Are they usable? Any comments?

Hi Rod,
Interesting question – I have never experienced this but according to the USDA:

There are several reasons why ground beef may remain pink at temperatures above 160 °F. This phenomenon is primarily associated with the pH and the level of pigment in the meat, as well as the fat content.

Normal fresh muscle has a pH ranging from 5.3 to 5.7. When thoroughly cooked, the myoglobin, oxymyoglobin, and metmyoglobin pigments of normal meat are converted (i.e. denatured) to denatured hemichrome, the grey pigment of cooked meat. Meat with a pH of 6.0 or higher can remain pink at 159.8 °F. The rate at which normal muscle pigments change to form the grey denatured hemichrome is affected by pH. The higher the pH, the longer the cooking time and/or higher the final internal temperature required for denaturation to be complete (Mendenhall, 1989). A high pH reduces the amount of myoglobin denatured by cooking, resulting in a pink color rather than the expected grey cooked color created by denatured hemichrome (Trout, 1989).

A high concentration of pigment also contributes to a red color in cooked meat. Meat coming from bulls typically exhibits both a higher pH and high concentrations of pigment. Mendenhall (1989) suggests that when patties are formulated from a mixture of bull meat, chuck, and beef trim with similar amounts of total pigment, there are significant differences in cooked internal color, indicating that the pH is responsible. But when pH is held constant, the concentration of total pigment contributes to the abnormal internal color. It was further shown that when cooked bull meat (pH 6.2) is compared to a mixture of bull meat, chuck, and trim (pH 6.2), the bull meat patty is significantly redder due to the higher concentration of pigment.

Most store-purchased ground beef is a mixture of meat from multiple sources (bulls, steers, cows, heifers) because ground beef is formulated to achieve a very specific fat content. Trimmings from many sources are combined.

A third factor affecting cooked ground beef color is the amount of fat in beef patties. Low-fat beef appears to have less conduction of heat than high-fat beef. Consequently, low-fat beef patties—including those that contain water, oat bran, carrageenan, and/or isolated soy protein—require longer cooking times and higher cooking temperatures to reach a certain internal temperature. Furthermore, patties can remain pink even though they have reached internal temperatures higher than the recommended 160 °F. In some cases, low-fat beef patties have not only taken longer than expected to reach the targeted end-point temperature but also maintained a pink color at temperatures of 160° to 165 °F (Berry, 1994; Troutt et al, 1992).

There is considerable variation both between and within beef patty formulations in endpoint temperature and color even when controlled cooking procedures are followed.”

I hope this helps. This LINK has even more information on the topic.