10 Ways to Use Peanut Butter

When it comes to using peanut butter, sandwiches are just the beginning.

Although peanut butter is a high-calorie and high fat food, it’s also been found to have many health benefits and is generally recommended as part of a nutritious diet. Peanuts contain mono-unsaturated fat (the heart-healthy kind), as well as Vitamin E, niacin, folate and fiber.

Studies have shown that eating nuts regularly and moderately helps against heart disease, and — here’s the good news — weight gain. So, there’s no need to feel guilty about spreading peanut butter on your morning toast.

Peanut butter fans are typically divided when it comes to the issue of choosing between the crunchy or the smooth variety. Startcooking.com will remain neutral in this heated debate. But the Skippy website tells us that creamy peanut butter is more popular than chunky, and that children and women tend to go for creamy while men like crunchy. (Who knew?) Skippy also reports that East Coasters are more into smooth, and West Coasters go for crunchy. Smooth peanut butter is more often called for in recipes, so perhaps it’s a good idea to keep both kinds on hand.

The healthiest choice in peanut butters is the kind labeled “natural”. These typically don’t contain the hydrogenated oil that most major brands use to stop the peanut butter from separating. Natural peanut butters typically have a layer of oil on top, and have to be stirred before each use. They’re also kept in the refrigerator so that they don’t spoil. They may or may not contain sugar, so take a look at the labels before buying. Some grocery stores or health food stores have a nut-grinding machine that will churn out whatever amount of natural peanut butter you need.

By the way, reduced-fat peanut butters have the same number of calories as regular — there’s less fat, but more sugar and typically more hydrogenated oil than regular kinds.

Anyone looking for an alternative to peanut butter can try a different kind of nut butter, like almond, cashew, hazelnut or pecan. For those in need of a nut-free substitute for peanut butter, there’s Peabutter, made from golden brown peas.

How to Use Peanut Butter

We all know ways to incorporate peanut butter into breakfast and dessert, but it also has a place in savory main dishes. Here are some ways to use peanut butter:

1. Add a spoonful to your morning smoothie for added protein.

2. Peanut butter gets all warm and gooey when spread on something toasted or warm. Try it not just on toast, but on wraps (rolled and warmed up), crumpets (it oozes into all the little holes), English muffins and pancakes.

3. Combine it with fruit: Peanut butter pairs well with apples, pears and is heavenly with bananas.

4. Rather than the same-old PB&J sandwiches, try peanut butter and fruit sushi. Apartment Therapy helps us out with a great photo-tutorial on these inspired sandwiches, which call for dried coconut and raisins.

6. Peanut butter and vegetables. Carrot and celery sticks sure taste better when they’re dipped in peanut butter! There’s a snack called Ants on a Log: you put peanut butter in a stick of celery and then stick some raisins on top.

7. If you like Asian food, you’ve probably enjoyed peanut sauce. There are many variations on this delicious sauce, which can also be used as a dip or dressing, but here’s a basic one.

8. You can also put peanut butter to use in soups. Emeril has done a great soup video called Peanut African Soup made with chunky peanut butter. 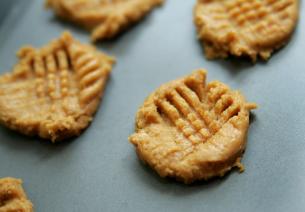 9. Here’s a tutorial on making Peanut Butter Cookies from Cooking With Engineers. Your friends and family will love you for making these. Or how about startcooking.com’s classic Hershey Kiss Cookie 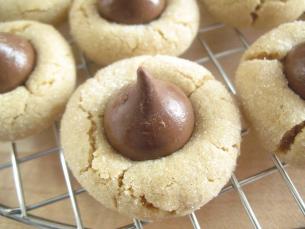 10. Here’s a great idea for a S’mores-like treat that you can make indoors. Pioneer Woman gives a great tutorial (photo below) exlpaining how to make Marguerites: Crackers with peanut butter and a marshmallow on the top, then put under the broiler. 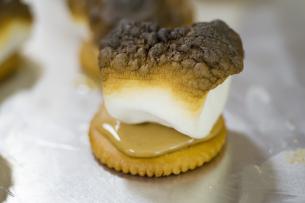 Marguerites are a simple, easy dessert. Photo courtesy of The Pioneer Woman.

Peanut butter also makes a useful tool for tricking your dog into taking his/her pills, if the poor thing needs them for some reason. We learned it years ago with a Labrador who developed arthritis in her old age. Simply get a tablespoon of peanut butter, and stuff an aspirin the middle of it. The dog will love the treat and get pain relief at the same time.

I use it with my Border Collie for bath time. I slap some peanut butter to the side of the tub, and she stand there licking it while I bathe her.

It makes the whole ordeal much easier.

As someone who grew up on “fluffernutters” I have no doubt you both use the good old fashioned peanut butter and not the “natural” stuff, which is way too soupy for my taste!

I had no idea dogs loved peanut butter! The pill trick is great but the peanut butter in the bath tub is most unusual! (The whole idea did make me laugh out loud!)

You don’t want to give them too much, for the same reasons you wouldn’t want to eat too much yourself – the fat content is sorta high. But, there are no other health issues with it, and as with all such things, moderation is the key.

Krystal got between 2 tsp and 2 tbs per day, and never gained any weight. She was the first dog I’d ever heard of giving it to, but I understand dogs almost universally love it. No surprise there, really. It’s tasty!

WIsh I’d known about the bath trick, though. She was a good-sized dog, maybe 70lbs, and while she didn’t fight the bath at all, it would have been good if she’d had something to concentrate on other than playing in/with the water

Sounds to me like Krystal leads a good life!

BTW Humans should stick to milk as the beverage of choice with peanut butter. Nutritionally speaking you get more benefits from combining the two.

Speaking of what’s good together nutritionally, have you seen this site? It’s the most comprehensive nutritional data resource I’ve ever seen, and I’ve seen a lot of them. You can spend hours just digging around. It’s great for when you’re wondering “was my mother really right about beets being good for you?”

But, to get back on topic, one of the best peanut butter things I’ve made in recent memory is this “No-Bake Peanut Butter Pie“. You really only want to make it when you have company so it all gets eaten at once, because otherwise you’ll skip meals eating it all yourself

KGW – that nutrition site is a fabulous resource! I’m going to add it to my front page under Helpful Resources.

I wonder how many calories are in each slice of the Peanut Butter Pie???

Enjoyed the post and suggestions. I think I will go prepare a peanut butter and jelly sandwich- you made me hungry…LOL!